This book is scheduled to be released on 1 November on Smashwords. 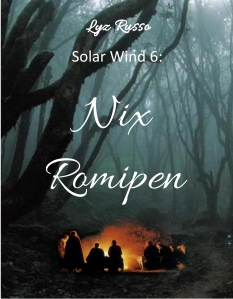 Romania. A place of harsh contrasts; dangerous and beautiful wilderness; a silent invisible people. This is where Federi was born; and this is where he takes Paean in their breakaway from the Solar Wind, their bid for freedom.

But Federi is hunting big game now. He is going after the Unicate, once and for all. The old gypsy curse of Falco is singing loudly in his blood, and he has to finish it. Whether it meets with Paean's approval or not. Too many have died; and despite Captain's politics, the Unicate still exerts its rule of terror in this remote, half-forgotten country.

As he goes after the Unicate, tracing the secret of the Hounds, something larger is tracing him, though. The trip of the Solar Wind into space has alerted some ancient forces. Federi and his best partner, Paean, trade places as he follows Captain back into space while she finds herself in the depths of a Unicate mound, with an unexpected ally, a Unicate "Other"...

For readers who loved the Solar Wind series, this sixth book closes off the first cycle.

We also would like to thank Roughseasinthemed, who has already posted a review of this book on Goodreads.

Here is her review:

This is another great read in the Solar Wind Series by Lyz Russo.

Although the sixth in the series, Russo manages to continue developing the original characters, introduces new ones, and adds unpredictable twists and turns to the plot.

Add to that, the location is always changing, on the earth, on the sea, in the air, in outer space. In Nix, Paean and Federi face their troubled pasts, visiting Paean's former home in the poor parts of Dublin, and Federi's homeland in Rumania and try to unravel further what the Unicate is up to as the pair realises their former neighbours' lives are at risk.

There is, as ever, plenty of tough action, and thoughtful, reflective moments, combined with some lively dialogue.

One aspect that stands out is, who are allies and who are enemies? Who can the crew trust when they meet new people, aliens, immortals, and 'Others'? But, the doubts and uncertainty just add to the suspense. I decided not to guess, just settled in to enjoy the read.

Russo continues to create a good story with every book and leaves us wanting to read more about the crew of the Solar Wind and their wonderful pirate captain Radomir Lascek. I'd join his ship!

For the rest of the series, click here (first book is free). https://www.smashwords.com/books/byseries/24238
Posted by kalinka1 at 8:42 PM