From My Cold, Undead Hand  (by Marie Marshall)

From My Cold Undead Hand (Where the Vampires Are, Volume 1) by Marie Marshall is the first book in what promises to be a thrilling, interesting take on vampire legend and lore. Chevonne Kusnetsov is a teenager living in the near-distant future, a world that you will recognize but it is subtly different from our own. Chevonne is like any other normal teenager - she goes to school, has friends, has a mother who worries about her, stays home alone after school reading books, but her "job" is not the job of normal teenagers - she researches and kills vampires. This isn't a Buffy the Vampire Slayer world, where the vampires are all beautiful, but our world where the vampires just want you dead. Chevonne is a Resistance fighter, and she's out to save mankind.

Marshall does a fantastic job with creating an alternate world for us, where the action happens at a breakneck pace. From using technology that isn't developed yet, to using weapons not designed yet, to using language and phrases not spoken yet, she creates a universe that is strangely familiar to us, yet it's a place where you have to watch your back or you'll be dead. Vampires aren't glamorous, it isn't romantic to meet a vampire in the alley behind the school, and they most certainly don't sparkle. Marshall also does a remarkable job of tying in the classic vampire novel, Dracula, but makes you believe that it's all real. This is a book that will leave you breathless for more! 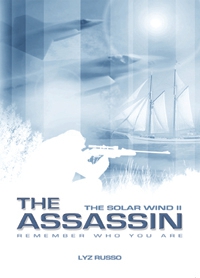 The author provided me with a copy of the book in exchange for an honest review which follows...

Captain Radomir Lascek and his band of unruly pirates, sailing upon his ship, the Solar Wind, continue to hide from the Unicate and their evil associates. However, there is more at stake now. Two data capsules in the Captain's possession explain that the Rebellion is on a similar path as the Unicate, and both forces could spell the end of the world if the Captain doesn't act soon.

When the Captain's secret station in Antarctica is attacked, he is forced to take matters into his own hands. He employs Federi, the part-time gypsy chef/master assassin and Paean, a ship's musician and budding genetic scientist to embark on a mission to assassinate as many of the top Unicate Officials as they can. Reluctantly, Federi teaches Paean the art of killing, something the fifteen-year-old finds to be a necessary evil in this futuristic world they are forced to survive in.

Struggling to deal with the burgeoning feelings he has for Paean, Federi confronts the "killing animal" that dwells within his heart. He knows he has the soul of an assassin. His greatest fear is that he will lose the love and admiration from the young girl, a certain loss he knows he could not endure.

As the story unfolds the reader discovers Federi and Paean share a type of gypsy intuition, a mystical connection that belongs only to them. This psychic ability blossoms into a deep love between the two, even though Federi is much older than Paean. This is gypsy love at its finest, and I was bewitched by the touching love story that drew me deeper into the adventure.

The book is long but filled with so much intrigue and suspense you gladly read on to unravel the various mysteries that are part of the whole adventure aboard the Solar Wind. For me, this book delves deeper into the characters and gives you a glimpse into the mechanics of their personalities. I like these pirates. Their humanity speaks to me. I can't wait to dive into the third book in the series, Freedom Fighter. Stay tuned…


We thank our reviewers for their time, trouble, and wonderful reviews!